There are two research avenues that I am extremely interested in: one is neuroengineering and the second is creating systems to help people in third world countries. The root of both of these research avenues is a desire to help others less fortunate than myself while doing novel scientific work and having fun doing it; values that were certainly enstilled at a young age. To learn more about all of these projects just keep scrolling down this page till you find what you're looking for!

For as long as I can remember I have been interested in the brain. This interest was first explored when I interned for Medtronic's Deep Brain Stimulation (DBS) division at Medtronic's Minneapolis HQ between my junior and senior years in high school. Working in the pain subgroup of the DBS branch, I learned first hand the merits but most importantly the pitfalls of how we diagnos diseases, how we treat neural disorders, and how pain is currently too subjective a metric. This exposure not only cemented my desire to pursue neuroengineering, but also to probe other avenues of neuro related research. I went on to work in Professor Kwabena Bohaen's lab between my freshman and sophomore years at Stanford on neurogrid. In Professor Boahen's lab I built a model of the human neocortex using neogrid, which at the time was the largest hardware model of the brain. This project was my first research experience at Stanford and was particularly fun because it allowed me to make connections between what I was learning in both of my majors. I am now currently working In Professor Tom Clandinin's lab on deciphering how fruit fly visual systems create and store memories utilizing positive, negative, and combined operant conditioning. I started working on this project during my junior winter and will be continuing until I graduate this spring (2018).

The motivation to help people in third world countries arose when I visited Dhaka, Bangladesh (my dad's home country) when I was 15 years old. The extreme inequities borne out of circumstance made me want to help those that did not have the same opportunities that I had, and so I created, built and deployed a water purification system called Pani Purification: a​ ​$25,​ ​solar-powered,​ ​easily-maintainable,​ ​UV​ ​water​ ​purification​ ​system​. The Pani Purification systems were ​deployed​ ​in​ ​daycares​ ​for​ ​street​ ​children​ ​in​ ​Dhaka,​ ​Bangladesh,​ ​​serving​ ​~400​ ​children.​​

As​ ​a consequence,​ ​I​ ​became​ ​​1​ ​of​ ​5​ ​international​ ​Google​ ​Science​ ​Fair​ ​Finalists​, 1 of 13 international Scientific American Science in Action Finalists, and got to speak about the lack of clean drinking water on many media outlets such as Science Friday with Ira Flatow (check out media section for more info). ​Most​ ​importantly, this​ ​three​ ​year​ ​long​ ​research​ ​endeavor​ ​taught​ ​me​ ​the​ ​value​ ​of​ ​cultivating​ ​and​ ​deploying cutting-edge​ ​applied-STEM​ ​research​ ​to​ ​better​ ​the​ ​lives​ ​of​ ​those​ ​who​ ​are​ ​less​ ​fortunate. I took this passion and between my sophomore and senior years at Stanford worked in Professor Juan Rivas' lab on creating an electrostatic precipitator (ESP) to reduce respiratory deaths in rural environments. According to the World Health Organization roughly 4.3 million people a year die from preventable respiratory diseases arising from indoor air pollution. The majority of these deaths are women and children who breathe smoke generated from indoor cooking. The ESP is a low power yet high voltage system that precipitates smoke out of the air. I am currently in conversations with Sajida Foundation (the same NGO I partnered with for the Pani Purification project) to deploy a few ESP prototypes in Bangladesh. 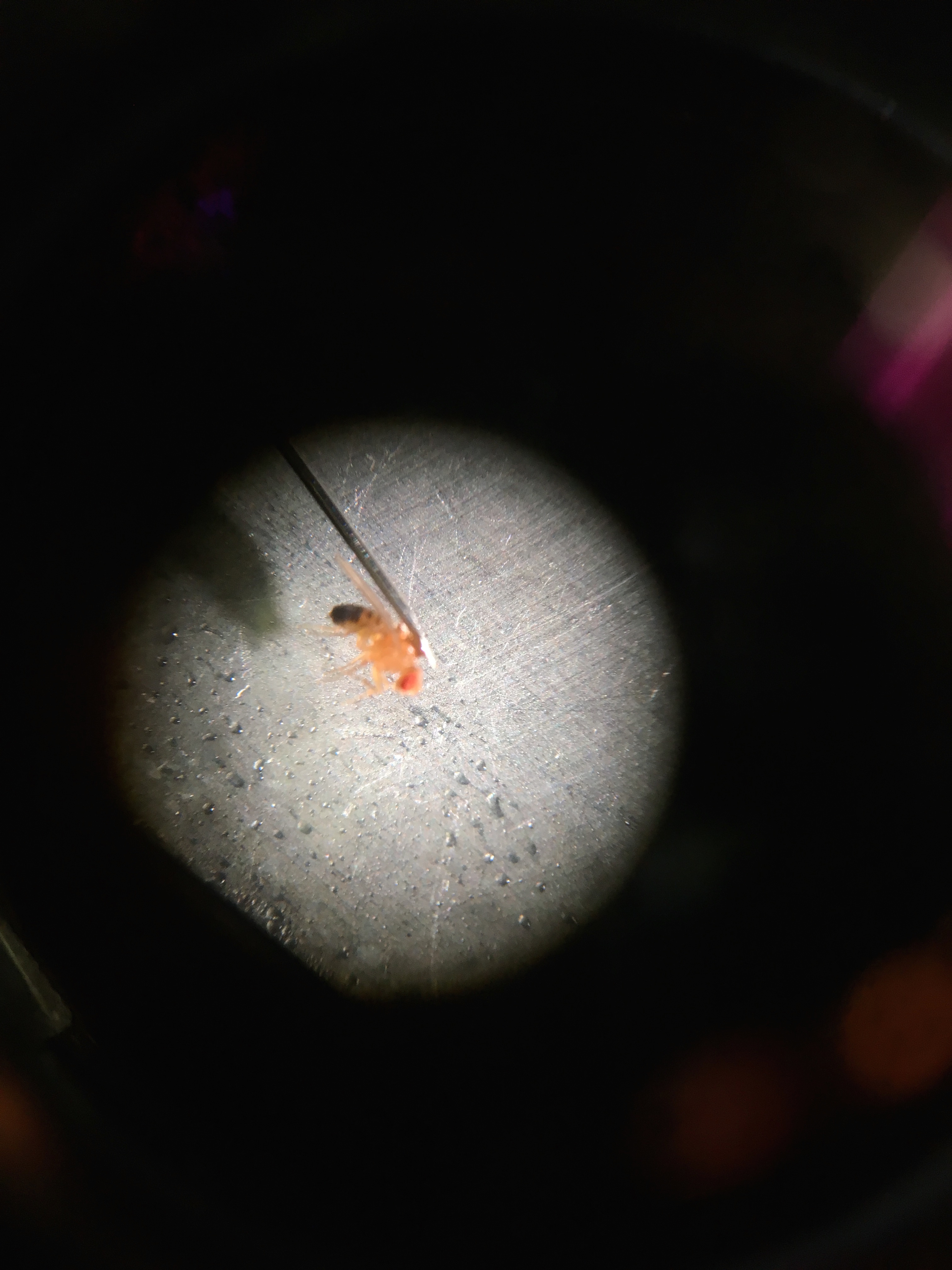 I​ ​had​ ​been​ ​exploring various intersections of neurobiology and engineering​ ​through​ ​my​ ​work​ ​at​ ​Medtronic​ ​and​ ​at​ ​the​ ​Brains​ ​in​ ​Silicon​ ​Lab.​ ​However,​ ​when​ ​I took​ ​Professor Thomas​ ​Clandinin’s​ ​class,​ ​​Molecular​ ​and​ ​Cellular​ ​Neurobiology,​ I was inspired to look specifically at the neural circuitry of visual pattern recognition, as a stepping stone towards artificial memory induction.

Throughout​ ​the​ ​following​ ​summer​ ​I converged on studying whether or not the fly brain has specific circuits encoding visual pattern memories, and if these circuits could be manipulated in control flies to instantiate memories. In short, I aimed to explore the fly brain at a circuit level by deciphering where pattern recognition memories are stored, and to artificially induce memories into a control population of flies untrained with the visual stimuli. This required a paradigm where I could show flies a neutral visual stimulus that does not drive any particular behavioral response, and then train them with rewards/punishments to selectively respond to a specific feature of the stimulus (i.e. dark edges). This would show that any repetitive behavior (i.e. following dark edges) was learned during training.

In order to achieve this, I modified the lab’s spherical treadmill surrounded by three virtual reality screens in tandem with the opposing edge visual stimulus (OEVS). The OEVS is comprised of crossing light and dark edges and produces no net movement in control populations of flies (the neutral stimulus). By matching the treadmill’s movement (a measure of the fly’s movement) to the OEVS I could see if the fly is behaving by its training rule (i.e. follow dark edges). I can then reward or punish the fly accordingly, by using positive (cool air puff) or negative (thorax shock) reinforcement.

I am currently conducting two-photon microscopy experiments, temperature sensitive shibire mutant experiments, and associative memory mutant (rutabaga, dunce, norpA) experiments with the paradigm that I created. This will help define where in the fly brain visual pattern recognition is encoded. After this, I plan to instantiate visual pattern recognition via optogenetic stimulation and FLP-regulated TRIC, an indicator that detects neurons that were active during training. I will then optogenetically stimulate the selected neuron populations in untrained flies to see if I can recreate the OEVS behavior. This procedure will allow me to see if memories can be instantiated. 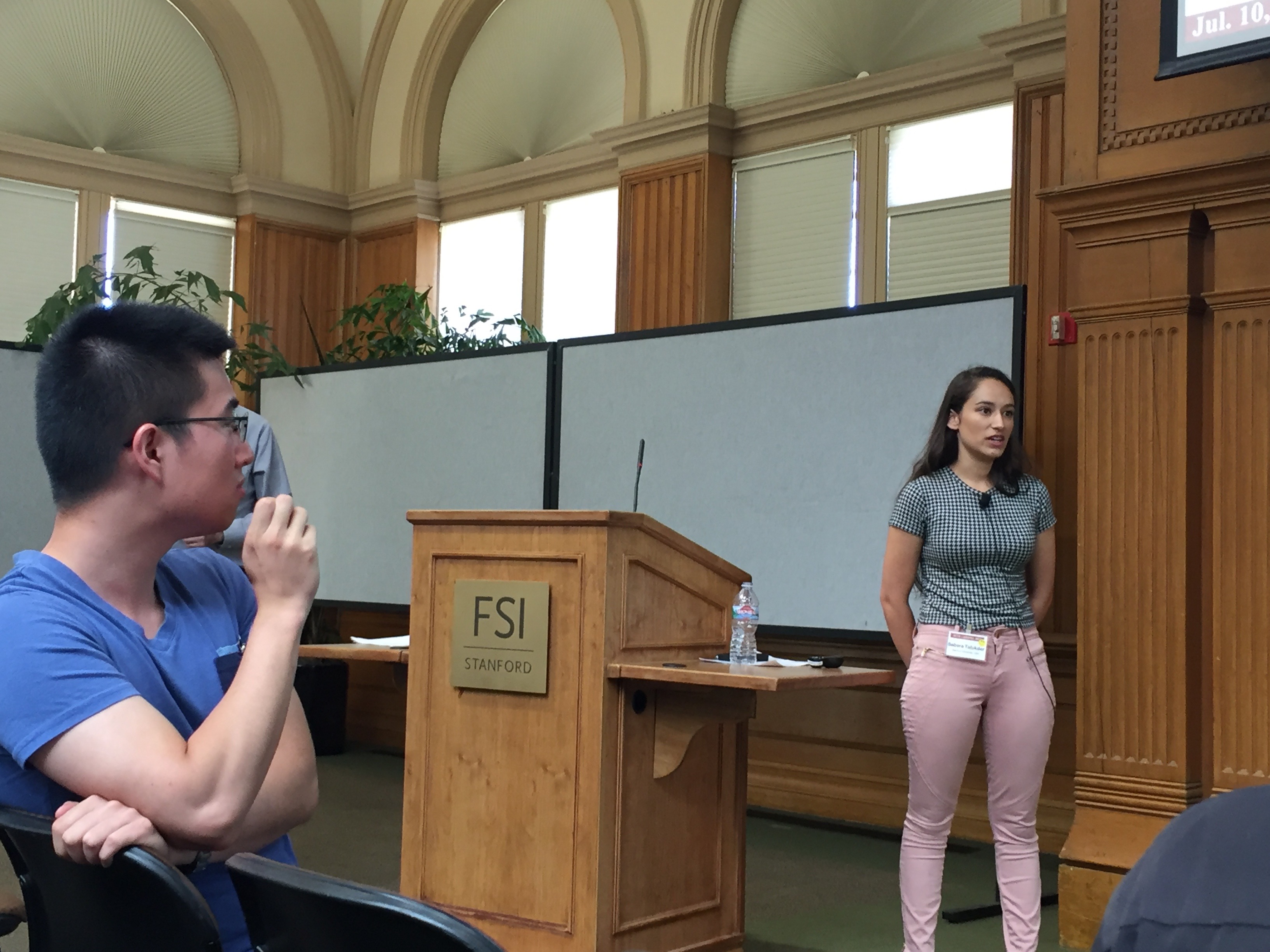 I began building an electrostatic precipitator (ESP) in the summer between my sophomore and junior years at Stanford with the hopes of creating a system to reduce the number of respiratory disease related deaths in developing countries. Designing systems for those in need has always been something that I am deeply passionate about and this project was a way for me to return to those roots at Stanford. Professor Juan Rivas' lab was a great environment to return to this passion, learn more about hands-on circuit design, and collaborate with PhDs.

ESPs can be a viable low power solution to address the problem of indoor air pollution in developing countries because they establish a large electric field between an electrode and a discharge surface. As particles flow through this field, they are negatively charged on the electrode, and then via electrostatic forces, collect on the discharge surface.

Most importantly, any device hoping to combat the indoor air pollution epidemic must be able to remove sub 10 μm diameter particle sizes. These size particles are deadly because they can penetrate deep into the lungs and alveoli. In order to address the cookstove emissions of sub 10 μm particles, the Global Alliance for Clean Cookstoves and International Organization for Standardization characterized emission based tier requirements for clean cookstoves. Where tier 4 cookstoves are the best and for low power systems emit < 1 mg/min/L of particles. 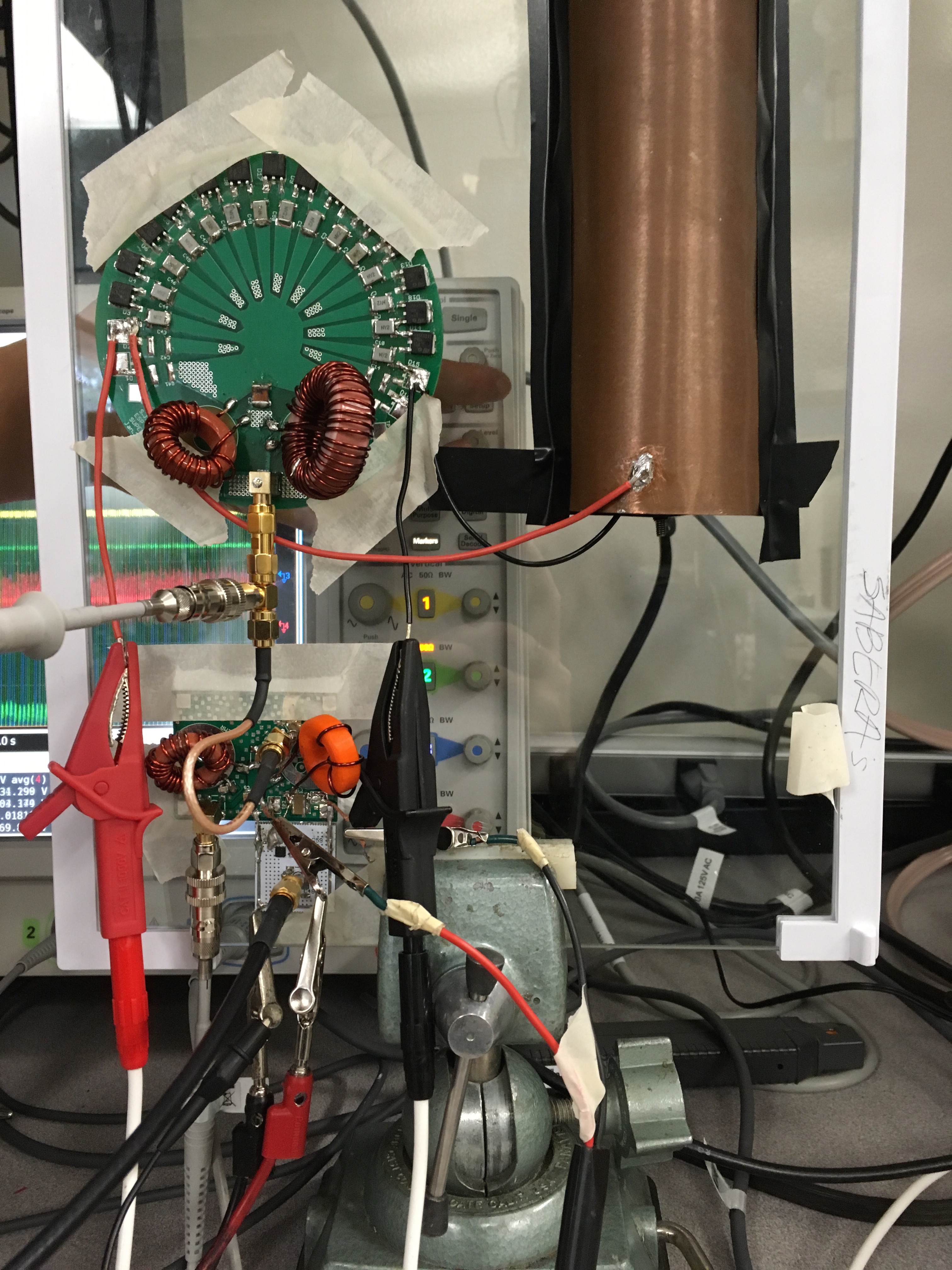 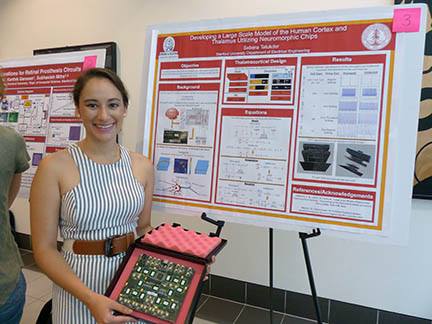 This was my first research experience​​ at Stanford and I was extremelly interested in seeing how electrical engineering and neurobiology could be intertwinned from an electrical engineering point of view. I wanted to explore this intersection​ ​​in​ ​Professor​ ​Kwabena Boahen’s​ ​lab​ ​at​ ​Stanford​ ​by​ ​using​ ​neurogrid​ ​to​ ​build​ ​a ​model​ ​of​ ​the​ ​human neocortex​ ​and​ ​thalamus​.​​

I started the project by understanding the different types of neurons that could be represented in neurogrid via the parameters that were manipulatable. Some of the parameters I worked with in order to achieve different neuron types were: rise time, channel voltage, channel current, and threshold voltage. Modifying these parameters and more allowed me to create: late spiking, regular spiking, fast spiking, low threshold spiking, and burst spking neurons. These broad neuron categories could then be more fine tuned to capture specific neuroal populations represented in the brain.

I next focused on sizing down the neuron population numbers from what we find in an actual brain to population sizes that could fit in Neurogrid. Neurogrid at the time theoretically had 1,048,576 neurons that could be programed into different cell types. However when you add the computational power needed to create neuronal connections both within a population (horizontal) and between populations (vertical) you very quick lost the ability to program and simulate ~ 1 million neurons. Therefore the task of balancing acurate neuronal population ratios, striving to make the neuronal populations as large as possible, while keeping horizontal and vertical connection specificity was an arduous task.

I created a neural model that utilized 758,528 neurons spanning over 15 of neurogrid's 16 chips. Ultimately this​ ​research​ ​used​ ​hardware​ ​matrix​ ​algorithms​ ​simulating the​ ​brain​ ​to​ ​construct​ ​animal​ ​brain​ ​models,​ ​with​ ​the​ ​goal​ ​of​ ​replacing​ ​the​ ​need​ ​for​ ​live​ ​animals​ ​in neural​ ​experiments. At the time the model I created was the largest hardware model of the brain ever created in terms of number of neurons (758,528 neurons). 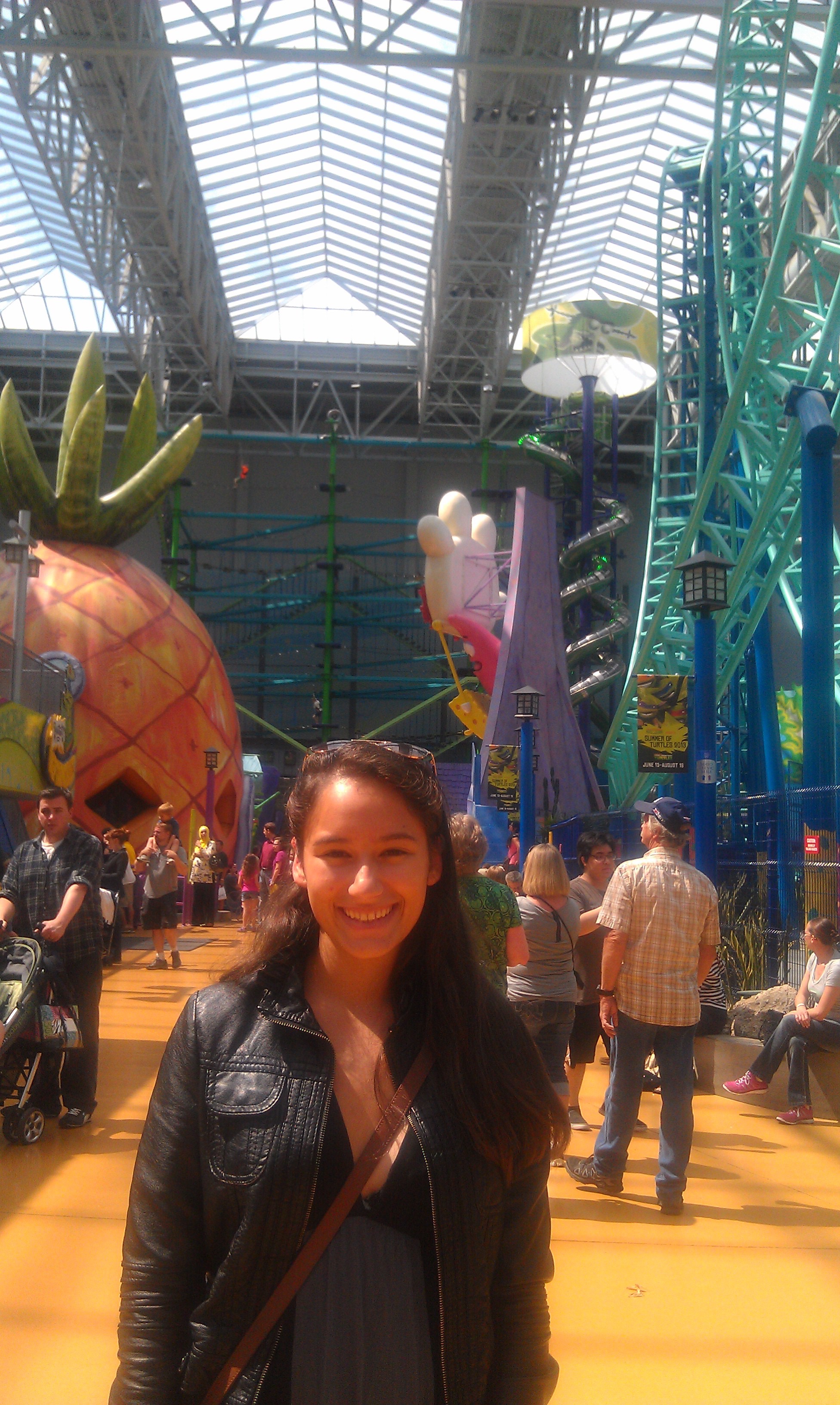 Since I finished the project earlier than expected, I then performed experiments to evaluate the difference between men's pain tolerance and women's pain tolerance responses. I can't say much more than this since I signed an NDA, but it was a very cool work! 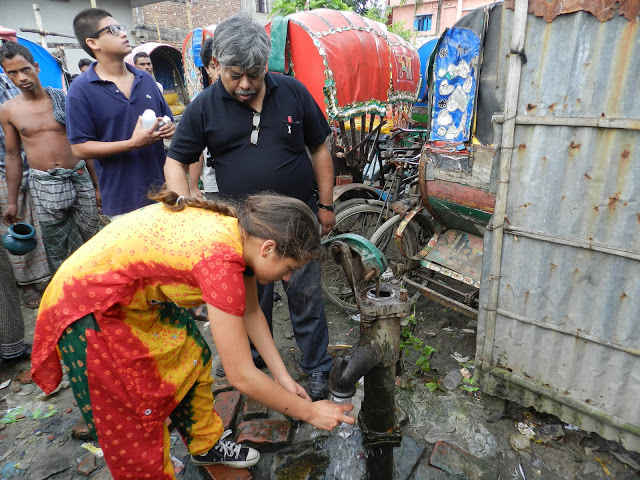 During the Pani Purifaction project in September of 2011 I conducted field research to analyze the bacterial and fecal matter contamination from 24 different drinking water sources across Dhaka. This is a map of the sites were I tested water in Dhaka as well as the data for each of these samples. Most of these locations also have pictures of me collecting the samples when you click on a location. I then tested these water samples at the ICDDR,b (the world’s leading cholera research institute) and Incepta Pharmaceuticals.

I later returnerd to Bangladesh in December of 2012 to implement two Pani Purification systems in daycares (Kowran Bazar and Komlapur) for street children. In order to make sure systems purified the water I tested samples at the ICDDR,b (world’s leading cholera research institute).

This three​ ​year​ ​research​ ​endeavor​ led to my recognition as 1 of 5 international Google​ ​Science​ ​Fair​ ​Finalists, 1 of 13 international Scientific American Science in Action Finalists, and as a evangelist for universal water rights. This afforded me the opportunity to speak with Ira Flatow on NPR's Science Friday, be a part of a PBS Newshour Special, and present on HBO’s Showtime about the dangers of climate change to drinking water in Bangladesh. More presentations can be found in the media or CV section. 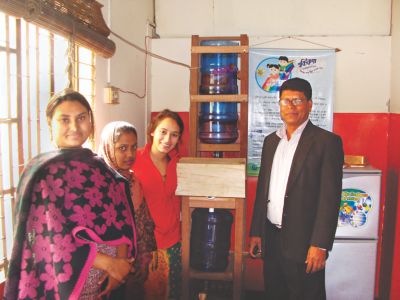 However most importantly I learned the​ ​value​ ​of​ ​cultivating​ ​and​ ​deploying cutting-edge​ ​applied-STEM​ ​research​ ​to​ ​better​ ​the​ ​lives​ ​of​ ​those​ ​who​ ​are​ ​less​ ​fortunate. This first experience with scientific research made me fall in love with research as a systematic way to tackle problems that plague people in society, and then provide cutting-edge solutions to alleviate the world’s worst problems.

Ultimately this research project was conducted to understand what causes children to become sick (waterborne pathogens) and to then develop a low cost (< $25), solar-based water purification system that alleviates the pathogens. The system also had to be deployable in rural villages and low lying flood affected coastal regions of Bangladesh, so that the people who needed the water most could have access to it. To see more data and the system please visit the project website.